The Distillers of Maryland & Washington, DC 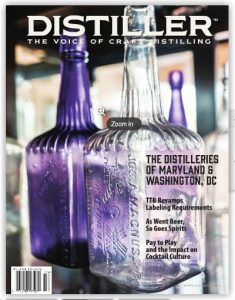 In the 2016-2017 winter edition of Distiller magazine, Fiore Winery & Distillery is featured as one of Maryland’s premier producers of Rye Whisky. An excerpt from the magazine article follows.

“No discussion of Maryland distilling would be complete without Mike Fiore. Fiore is a powerhouse of energy and opinions. When you have found Mike, you have found a lot of laughter. In short, you have found the party – a one-man party with lots of life experiences and beverage alcohol experience.

With his wife Rose, Mike bought a farm 45 minutes outside of Baltimore in 1975, and having grown up on wineries in his native Italy, he began planting grapes, opening a winery in 1986. As the wine continued to sell, he added to the gardens, and tasting room. The whole operation grew in size and scope to include a wedding venue.

Fiore led a group who successfully lobbied for allowing Maryland winemakers to distill 200 gallons of grappa in 2005, an amount that was later increased to 1,900 gallons in the Maryland Winery Modernization Act of 2010. Fiore began making …”