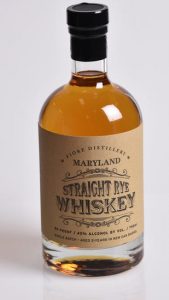 Over the course of two tastings, Wesley Case, Amy Langrehr and Ryan Detter tried whiskeys from six Maryland-based brands to taste what they’ve been working on, while looking for clues as to where the industry is headed. No mixers, ice cubes or splashes of water — just whiskey, neat.

Whiskey is deeply rooted in the history of Maryland, which trailed only Kentucky and Pennsylvania in the spirit’s production post-Civil War. But after Prohibition, Maryland whiskey fell out of favor, and appeared destined to remain in the past tense.

That is now far from the case. A new generation of Maryland liquor companies has set out to make local whiskey a topic relevant today… Read the full Baltimore Sun article.

In 2007, Mike Fiore began distilling grappa and limoncello in Harford County. Now, led by his 29-year-old grandson and distiller Tony Fiore, the small business debuted its whiskeys a decade later. Tony Fiore said his main motivation was simply to see if he could produce a whiskey. Once the current batch on sale at the distillery sells out, they won’t have more whiskey until next year, as the next batch ages until March 2018, he said.

RD: This smells really good. It’s got a thinner mouthfeel, but it’s pretty accessible. It doesn’t taste like 90 proof, I’ll give it that. It’s not smacking you in the face. The only thing I’d say is it’s a little light in body.

AL: It’s got some fire on the nose. I get caramel, too. It’s pretty smooth.

WC: It has enough of the spicy notes to distinguish it as a rye. I don’t think it’s announcing itself by kicking the door down. It’s a nice sip.

RD: There’s no spice in there at all — a lot more caramel and vanilla. Both of these were aged two years in new oak barrels. I think this tastes just a little young, in terms of how long it aged.

WC: This dives directly into the sweet attributes of bourbon that many tend to like. A really good bourbon, though, should still have a noticeable kick. This is a little bit one-note, but it’s not bad at all. I think I prefer the rye.